Posted by Craig Iskowitz on May 16, 2009 in Conference Summaries 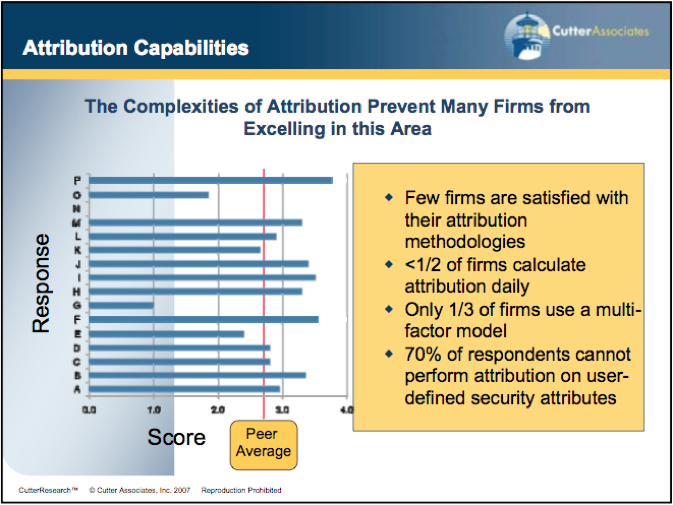 This is a summary of a session from the FRA’s Performance & Risk Measurement Symposium that was held in Boston on April 23-24, 2009.

Jim provided a well-researched overview of the recent financial crisis as well as some tangential, but interesting facts about the economy.

Roots of the Financial Crisis

Jim quoted from an article by Nassim Taleb, “Ten principles for a Black Swan-proof world“:

People who were driving a school bus blindfolded (and crashed it) should never be given a new bus.

While Jim used this point to highlight the financial industry’s role, the author was in fact, indicting everyone who was involved (universities, regulators, central bankers, government officials, and various organizations staffed with economists).  Members of Congress who facilitated the crisis, such as Rep. Barney Frank, D-Mass., have paid no penalty and suffered no punishment at all for their negligence and I brought this up to Jim in the Q&A. (Take a look at this article by the Boston Globe’s Jeff Jacoby, “Frank’s fingerprints are all over the financial fiasco” for a terrific overview of the Frank’s role in the economic debacle of the century.)

“No attempt to measure investment performance is complete without measuring the risk taken to achieve the result.”

How many smart investors ignored this rule when they overloaded on credit default swaps and CDO’s?   They also forgot that “the market risk of an investment cannot be reduced by diversification since it is shared to a greater or less degree by all investments in the market.”  (ditto)  Performance professionals need to have a solid understanding of risk management, according to Jim.

Where has all the bailout money gone?  Jim pointed out that most of the $80 billion in bailout money provided to AIG went into the pockets of global banks such as Goldman Sachs, JPMorgan Chase, Société Générale and Deutsche Bank.  The burning question is why were AIG’s trading partners, including foreign banks, let off the hook while US taxpayers footed the bill?  (see “Inquiry Asks Why A.I.G. Paid Banks” in the New York Times for the gory details)

I disagreed with Jim when he said that the roots of the crisis goes back to the Reagan/Thatcher era of laissez-faire attitude towards regulation.  My opinion is that it was government intervention in the markets that encouraged the poor investment decisions that led to the credit crunch.  Fred L. Smith Jr. from the Competitive Enterprise Institute summed it up quite well when he wrote the following in a letter to the WSJ:

A driving force behind all this has been radical egalitarianism — the idea that something that can be afforded by some should be made available to everyone… Under the egalitarian promotional housing policies of the last few decades, banks became institutions that would loan you money even if you were unlikely to be able repay it. The moral hazard problems created by our bipartisan egalitarians (the Community Reinvestment Act, the mandates on Fannie Mae and Freddie Mac) enticed far too many Americans into purchasing homes priced beyond their means. There is a critical distinction between the democratizing tendency of the market and the coercive egalitarian policies of politics.

I’m a supporter of the subjective theory of value that asserts that the seller and buyer of products or services are the only ones able to determine the value.  When the government decides to impose prices on the marketplace, only disaster can result.

Jim next presented some interesting aspects of the Bernie Madoff scandal.  He referenced a document submitted to the SEC in November 2005 (three years before he admitted to his Ponzi scheme), which was obtained by the WSJ, “The World’s Largest Hedge Fund is a Fraud”.  The author of the document was Harry Markopolos, an independent fraud investigator and derivatives expert, who originally alerted the SEC to Madoff’s scam back in May 1999!  The fact that the SEC has been ineffective and bumbling throughout both Democratic and Republican administrations shows what a low priority it was for both parties to hire competent staff and provide the necessary funding.

Paul Kiel wrote a nice piece on the Markopolous document, over at ProPublica.org.

Jim presented the results of a survey done by his firm regarding the attribution capabilities across the industry.

Jim presented the results of a survey done by his firm regarding the use of benchmarks.