Posted by Craig Iskowitz on Jul 8, 2018 in Artificial Intelligence, Banking

Financial services firms are dealing with a crisis of consumer confidence that threatens to drive customers into the arms of non-bank providers.

This is according to Natalie Cartwright, co-Founder and COO of artificial intelligence technology vendor Finn AI.  As part of her presentation at American Banker’s Digital Banking Conference 2018, Cartwright noted that 57% of North Americans are financially illiterate (that includes you too Canadians) and less than 25% use any kind of savings product.

When they say voice here, they mean speaking to humans in call centers, not speaking to voice-activate digital assistants like Alexa or Siri. The hidden stat in this graphic is that only 26% of consumers trust their banks to provide unbiased advice. This could come back to haunt the banking industry as more consumers are attracted to financial services products sold through consumer-facing retail and technology giants like Amazon, Facebook, Google and WeChat. (See Will AI be an Advisor’s Best Friend or Worst Nightmare?)

60% of consumers believe that their bank should be helping them achieve their goals. This is a tremendous opportunity for banks to build stronger relationships with their customers and learn more about their financial pans. (See 9 Questions on Artificial Intelligence for Wealth Management)

“By far, the greatest danger of AI is that people conclude too early that they understand it.” – Eddy Ortiz, VP Solution Acceleration & Innovation at @RBC on the importance of understanding the use case for AI to create the greatest value for consumers. #DigBanking18 pic.twitter.com/J7cVwdNmqO

The opportunity of AI is mind-bogglingly large and can impact every nook and cranny of the financial services industry.  AI has been referred to as the “third wave” of revolutionary technology. The first being the world wide web (what we now just call the Internet) and the second being mobile.

An AI-powered digital experience will be able to anticipate our needs and offer additional benefits without being prompted. This experience is called a “cognitive moment.”

What is interesting about these cognitive moments is that, to the user, it can appear as if little has changed. The user interface is not vastly different, the massive troves of data and technology behind the scenes remain hidden, and the companies are not announcing that they’re even using AI.

What happens when everything is just a channel?  When I stream music from Spotify, it doesn’t matter if I’m using my laptop, desktop of smartphone. The service moves seamlessly between the different devices.  I can read a book on my Amazon Kindle and then switch to the audiobook version and it picks up right where I left off reading. Banks need to being building device-independent experiences into their core consumer facing technology.

Why do I have to re-enter my account number when I switch to another agent? Or how about automatically populating all my forms when I apply for another product on your site? Can I start a loan application on my desktop and complete it on my phone? (See 4 Best Practices for Banks Launching Digital Advice Channels)

For me, this is the most important slide of the #DigBanking18 conference. Nice job, @innov8tr pic.twitter.com/vsoLtgYsqA

Ambient Computing, where the device used to access the software become irrelevant, will require artificial intelligence to provide a truly seamless experience for users.

Hopefully they will spend at least 1% of that on strategy design, use cases and desired, measurable outcomes as well as talent upgrades #digbanking18 #digitalwealthmanagement #reinventbanking https://t.co/WXC0rLbffW

I would recommend that banks apply some of that increased technology spending towards cybersecurity.

In 2018, cyber attacks against banks have increased by 1.5 – 1.8 times, said Iliya Garakh, CEO of Passwork.me. Hackers and cyber criminals are becoming more sophisticated than ever, with attacker using Artificial Intelligence to gain more design knowledge regarding bank security systems, bank operating systems, and their technological design, she warned.

Banks that are moving up the lifecycle of conversational banking technology. 10% of conversations with a chatbot were sales opportunities, which was higher than expected. –Natalie Cartwright ⁦@finnforbanks⁩ #DigBanking18 pic.twitter.com/uExwY6k415

AI is becoming a technology that more than pays for itself.  As more consumers become comfortable with interacting online, they are more likely to react positively to sales offers delivered as an integrated part of the experience.

In a short span of two to three weeks, the bot has led to a marked improvement in customer service with a 5X to 6X increase in a number of customer responses. “We have has seen a 600 % increase in the lead generation after the launch of the robotic automation bot,” she reveals.

Helping consumers understand how their credit score is calculated and nudging them towards behaviors that will improve –Natalie Cartwright ⁦@finnforbanks⁩ #DigBanking18 pic.twitter.com/KFlKvMXor3

Nudging and subtle coaching are the most effective ways to modify human behaviors.

Why? Unlike classical economic theory, where people are fully rational and always do things in their best 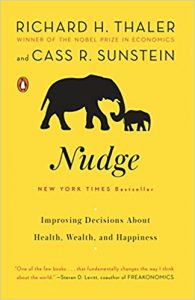 interest, humans are really lazy, uninformed, and unmotivated. We make bad decision because we lack information, or space out, or are too stupid to investigate what decisions will make our lives better.

Nudging’ relies on the assumption that people are pre-disposed towards the easiest option of any decision. Using this theory, a chatbot combined with artificial intelligence, will allow for tasks like loan repayment in small, easier to grasp steps.

“any aspect of the choice architecture that alters people’s behavior in a predictable way without forbidding any options or significantly changing their economic incentives.”

Personetics offers a chatbot solution that can be white-labeled and integrated into existing banking services, using predictive analytics powered by AI to provide these “nudges” to customers:

In the case of student loan debt, these nudges — which could take the form of push notifications or other alerts, depending on the user’s bank — could reveal hidden money that could be put towards the loan, or alert a user that they have the present ability to make an additional payment on the loan…

Proof of Concept with Chatbots

The province of Alberta, British Columbia contains a little over four million people. Not much when compared to other metro areas in North America.  But what Alberta lacks in population, it makes up with innovation.

ATB’s Director of Product Innovation, Sandi Boga, provided a number of best practices and other observations that came out of the POC.

Customers like the ability to multi-task, such as performing banking tasks while cooking, bathing or driving.  This makes a voice-activated interface, such as the one provided by Google Home, an ideal choice.

However, the wearables use case fell flat, Boga reported. People don’t want to talk to their wrists, she explained.

Voice assistants should have a sense of humor, she continued, since this increases customer satisfaction.  They also performed a survey that found that 6% of people would switch banks if they offered a digital assistant interface.  Using surveys is important when building your requirements, Boga insisted. You should design features based on what your customers want and feel comfortable with rather than what you think they want, she warned.
Boga divided the bank’s customers into three groups:

When ATB launched their POC, the following features were available to start through voice commands:

One of the positive results of the POC was a sharp reduction in call center volume, Boga noted.

Security was not skipped for the POC. The bank implemented a voice PIN that was required in order for a customer to be authenticated. Many people assumed there the system’s voice identification would be enough. However, the Google Voice Match function was not sufficient to pass the bank’s compliance process since it can be spoofed, Boga pointed out. They also limited any commands that came through voice assistant to only paying existing bills, not adding new ones.

You never know what you will learn at a banking conference…per research from Ford, it’s apparently more dangerous to text while driving than to catch a mouse loose in your car while driving. So, there. STOP texting and driving! #digitalbanking2018 #digbanking18 @SourceMediaCo

The implication here is that there are enough incidents of mice running around inside people’s cars while they’re driving to be statistically significant.  Or maybe Fords are more attractive for mice to hide in than other brands of cars?

I will be patiently waiting for this critical research work to be done.